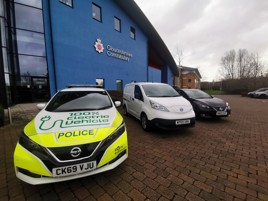 The Police and Crime Commissioner for Gloucestershire has raised concerns over the use of electric cars as response vehicles.

Gloucestershire Constabulary has the largest fully electric fleet in the UK by way of percentage with 21% of their 435 vehicles being fully electric.

However, Nelson told a recent Gloucestershire police and crime panel that he is concerned about the operational impact electric vehicles are having on the force, reports the Stroud News and Journal.

Nelson explained how some officers who drive electric vehicles (EVs) have a problem trying to find recharging facilities in the county and they “run out of puff” and need to get another police car.

He was responding to a question from councillor Steve Robinson who asked if the PCC supported the use of electric cars.

Nelson said: “We have the largest fleet by percentage size. That has brought its problems.

“The design options available for electric vehicles for operational uses are not perhaps as advanced as I would like them to be. So, let’s put it like this, I’m cautious about going any further down that road at this stage.

“I’d like to see more operational choice so that, for instance, if an officer is out in a rural area on a road traffic accident and his lights are one, his radio is on, his heater is on, I wouldn’t want him to run out of power for all of those different facilities, simply because he or she is in an electric car.

“I’ve heard lots of problems with officers driving around in electric vehicles having problems trying to find recharging facilities. Running out of puff and then having to get another vehicle.

“So, although the world is going down that road and I fully understand and support climate controls and green areas, it’s definitely an important thing but my first priority is to fight crime. And therefore, I have to take the operational effect into account.”