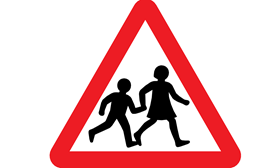 A new coalition group is calling on the Government to introduce vehicle free school streets across the UK to help improve air quality.

School Streets would follow a model pioneered by Hackney Council that makes a street around a school temporarily a pedestrian and cycle only zone at set times in the morning and afternoon.

Vehicles are not permitted to enter the zone between these times unless they have been granted an exemption.

Not only are School Streets a way of reducing the number of vehicles near schools, they are also a way to boost active travel by parents and children.

The calls to introduce more School Streets follows new analysis by Queen Mary University of London (QMUL), on behalf of Global Action Plan (GAP) and the Philips Foundation, that shows that if outdoor air pollution is halved, there could be up to a 20-50% reduction in the number of children with poor lung function across the UK and Republic of Ireland.

The analysis also finds the reduction in air pollution seen during the country-wide lockdown lead to asthma attacks in children “significantly reducing”.

The coalition is made up of Global Action Plan, the Philips Foundation, Living Streets, Modeshift Stars and Mums for Lungs, with the support of Philips, the National Education Union, and NAHT.

The action group wants the Government to commit to a legally binding target to meet World Health Organisation limits, as well as introduce measures like School Streets across the UK.

The Government has already said it will be setting new air quality targets for the UK.

To support the movement, Global Action Plan and the Philips Foundation, with the endorsement of Philips, have launched “The Clean Air Schools Framework”.

The framework is a free online tool that gives local authorities, teachers, headteachers and parents a bespoke blueprint of actions for tackling air pollution in and around the school from its database of 50 actions.

The impact of introducing School Streets

The coalition is especially urging all local authorities to use the framework, highlighting actions taken in Hackney, which led a grassroots initiative proactively tackling air pollution and pioneer of School Streets.

The first four School Streets launched in the borough showed that traffic reduced by an average of 68%, the number of children cycling to school increased by 51% and vehicle emissions outside schools (NOx, PM10 and PM2.5) are down by 74% as a result of the schemes.

Chris Large, co-CEO at Global Action Plan, said: “Local authorities must take advantage of free tools such as the Clean Air for Schools Framework, as the analysis by Queen Mary University of London shows, air pollution impacts the daily lives of so many children.

“But they must act now. The results of our most recent “Build Back Cleaner Air” report found that clean air practices can help to reduce the spread and exacerbation of COVID-19.

“Therefore, protecting today’s generation of school children against the toxins carried by air pollution is not only imperative to preventing damage to children’s daily health but also to reducing the impact of this pandemic and future pandemics.”

Cllr Jon Burke, Hackney Council cabinet member for energy, waste, transport and public realm, said his areas has one of the biggest School Streets programmes in the country - with nearly all primary schools in Hackney set to have one by September.

He said: “Hackney is rolling out over 20 traffic filters across several areas to help rebuild a greener Hackney after the pandemic - securing some of the benefits, like cleaner air, less traffic and higher levels of active travel that lockdown saw.

“We’d urge other councils to join us in taking the same action and help to protect children from the devastating effects of air pollution.”

A quarter of parents admit to engine idling on school run

More than 8,500 schools, nurseries and colleges in England, Scotland and Wales are located in areas with dangerously high levels of pollution, but the return to school could see the problem intensify with 62% of parents saying they are more likely to drive their children to and from school as a result of the recent pandemic.

The increased dependency on the car comes as more than a quarter (27.2%) admit to leaving their engines running – known as idling – during the school run, according to a detailed new study by Renault. Men are 50% more likely to do it than female drivers, representing 32.7% and 22% respectively.

Renault studied the habits and attitudes of more than 4,000 ‘school run’ parents and motorists. Of the reasons given for leaving their engines running nearly a third cited doing so because they are only stationary for ‘a short while’ and 26% wanted to keep the heater or air-con on.

Almost two-thirds (60%) of all drivers said they were unaware that it is illegal under Rule 123 of the Highways Code. Authorities can now issue £80 fixed penalties under Road Traffic Regulations 2002 and Section 42 of the Road Traffic Act 1988 in Scotland.

A lack of parking near schools is the biggest infrastructural challenge to idling.

Overall 23% said they needed to be ready to move their car into a suitable parking space. Naturally, this issue is worse in urban areas – 60.9% – compared to rural locations with just 11.5%.

The report underlined the reasons for the ‘school run’, with 30% dropping their children off by car because it’s on their way to work, 18% because of safety concerns and 12% have no other means of getting them to school.

The issue of idling is greatest within built-up urban and suburban areas according to Renault. Half of those live in cities, yet 12% of those in rural areas admit to doing it regularly. Idling for just 10 seconds wastes more fuel than restarting the engine.

A 2019 study by Kings College London revealed that children in London travelling to schools across the capital are exposed to air pollution five times higher than at any other time of the day. Renault found that London accounted for the highest number of idling offenders – 22.5%.

“The fact that the majority of people don’t realise that idling is illegal just highlights the scale of the problem,” explained Matt Shirley, senior manager, electrification and new mobility.

“Every minute a car is idling it produces enough emissions to fill 150 balloons. It goes without saying, if the 27% of school run journeys stop idling, there would be a significant improvement in the air quality for their children.

“This is not about demonising the school run, our study underlines the importance, even more so since lockdown, of the car. We just want parents and guardians to be mindful of the detrimental impact of idling, and to alter their behaviours for their own children and those around them.”

Defra has opened up a new round of £2 million in funding for local authorities to help with their air quality plans.

Air quality trial will cut some motorway speeds to 60mph

Highways England is to trial cutting motorway speed limits in four areas to 60mph to monitor the impact on air quality.