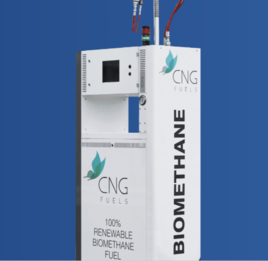 The company said the new station also puts Inverness and Aberdeen within range of using the biomethane station.

The site near Glasgow can refuel up to 450 lorries per day with renewable and sustainable biomethane sourced from food waste.

CNG Fuels said switching to biomethane can help cut carbon emissions by 90% and can help reduce lifetime vehicle costs by 30%-40% compared to diesel.

Waitrose, Hermes and Warburtons are some of the major UK brands to switch from diesel to renewable biomethane to cut haulage emissions.

HGVs account for 16% of UK transport emissions, and 4.8% of total greenhouse gas emissions in Scotland, making it a key sector to decarbonise.

The new station will cut 70,000 tonnes of greenhouse gas emissions each year when fully utilised.

The new station, located at the Eurocentral industrial estate off the M8 near Bellshill, will support both local Scottish fleets as well as brands making low-carbon deliveries from England to Scotland.

The station is also located within proximity of two HGV dealerships – Scania and IVECO – which are among some of the vehicle manufacturers of biomethane-ready HGVs.

The Bellshill station is the latest in CNG Fuels’ UK-wide strategic network of refuelling stations.

Seven stations are already operational with plans to open up to 14 more by 2023, including the world’s largest in Avonmouth near Bristol, by the end of 2022.

CNG Fuels has attracted £80 million of investment from Foresight Group to help fund the creation of a UK network of 14 biomethane fuel stations.

CNG Fuels is set to open a biomethane refuelling station for HGVs to support low-carbon deliveries in Wales and the South West.

Smart Transport member CNG Fuels has opened a biomethane refuelling station in Newark, Nottinghamshire, which is the first to serve the north-east region.