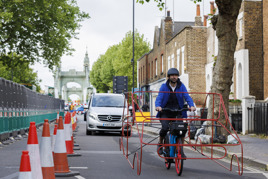 Experiments aimed at showing show just how much road space can be saved if more people switched from a single occupancy car trip to cycling have taken place in London, Paris and Brussels.

Micromobility operator Dott wanted to demonstrate the impact ahead of World Bicycle Day on 3 June.

It conducted one-off demonstrations to show how cities can be transformed if more people switched from driving to cycling.

Dott riders took to the streets in Hammersmith, London, wearing a specially designed car frame to demonstrate how single occupancy car journeys take up room for at least four cyclists.

The company says that by reducing the number of cars on London’s roads by just 20,000 cars, around 55 miles of roads could be freed up.

It adds that a huge part of the problem is the high number of car-trips with just one person – 65% of all trips are single occupancy, meaning a modest switch from car trips to cycling could substantially decrease congestion and provide more efficient travel across the capital.

Furthermore, the majority of capital car journeys are easily completed by bike – according to the London Mayor’s office, it says, two-thirds of London car trips could be cycled in under 20 minutes.

Dott co-founder and CEO Henri Moissinac said: “Our latest project highlights the absurdity of single drivers hogging the capital’s roads, when other forms of transport are openly available and so much better for both the individual and the community. It’s time we reimagined how we travel across our cities, which is why we’re here to unlock London with clean rides for everyone.”

Following their launch in the London borough of Hammersmith & Fulham, Dott e-bikes will arrive in more boroughs across London in the coming weeks.