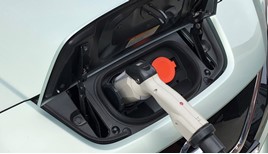 The Charge My Street campaign is set to install 100 new electric vehicle (EV) charge points throughout Cumbria and Lancashire.

Two new EV charge points and two charging sockets for e-bikes have been installed at Blain House in Penrith as the latest in a series of installations.

However, this is the first of the installations to have integrated charging facilities for e-bikes, a prospect that Richard Ingham, Cumbria’s bicycle mayor sees as an important step forward.

He said: “It makes a statement that cyclists, whether they be on e-bikes or non-assisted bikes are welcome here which is important for Penrith because it lies on the coast-to-coast, the UK’s most popular cycle route.

“It’s becoming increasingly apparent that transport has a very large contribution to our carbon footprint and poor air quality in town centres.

"Cycling and walking for our daily short journeys is a really good way to reduce our car use and tackle those issues. Cycling and walking to school, work and local shops is also a great opportunity to be more active and healthier.”

The charge points are located at Blain House, headquarters of Eden Housing Association (EHA) on Bridge Lane. Using share offer funds as well as government contributions, Charge My Street installed the charge points at no cost to EHA.

John Clasper, chief executive of EHA, said: “We’re really excited to see the charge point up and running. The idea was introduced to us that we could do something for our staff and visitors as well as members of the public who either already drive an EV or want to switch to one.

“Eden Housing Association is a community organisation, and it was a no-brainer for us to make use of the space we have in order to better serve the community at large.”

Daniel Heery, director of Charge My Street, said: “We work with lots of different site hosts and we really look for organisations whose values align with ours and Eden Housing Association have a real commitment to reducing their emissions and helping to build a more sustainable economy for Cumbria.

“It’s great that we’ve got this spot so close to the main road. It provides all the people who live around here or work in the nearby hospital a place to charge their cars that they may not otherwise have had, especially if they live in terraced housing without a driveway.”

Low-income voters who are reluctant to pay for charging at public points could halt mass adoption of EVs, according to the Social Market Foundation.

BP Pulse is set to expand its ultra-fast EV charging infrastructure with new charging hubs, the first of which is set to open this year.

Liberty Charge is rolling out 20 electric vehicle charging points across 10 sites in the London borough of Waltham Forest.