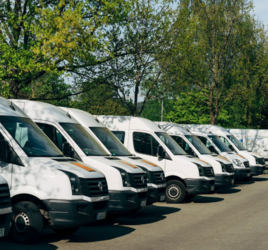 Think tank Centre for London is suggesting a last mile delivery strategy overhaul for London as parcel deliveries are expected to double by 2030.

It contends that commercial fleets should be forced to consolidate deliveries made to high streets and be encouraged to switch to electric vehicles (EVs) through a new pay-per-mile road user charging scheme.

The report – Worth the Weight: Making London’s Deliveries Greener and Smarter – from the Centre for London think tank also argues that the capital’s councils should review the London Lorry Control Scheme (LLCS) to allow quiet deliveries to take place during evenings and at night.

Furthermore, it says that Government should fund upgrades to power distribution networks, as well as charging facilities in commercial premises such as depots, with forecasts suggesting at least 4,000 rapid charge points will be needed in London by 2025, an 800% increase from the 500 in the city at the end of last year.

Currently, freight represents 15% of total vehicle miles travelled in London, but 34% of the nitrogen oxide (NOx) and 27% of fine particulate matter (PM2.5) emissions from road transport. Freight and deliveries also account for a quarter of London’s total carbon emissions from transport.

To combat this, the report recommends that the Mayor of London and London boroughs should ensure space is available for logistics hubs near homes and embrace dynamic and digitalised kerb management.

It is also calling on the Mayor of London to work with parcel delivery companies to put 90% of Londoners within 250 metres of a universal parcel pick-up/drop-off point by 2025, equivalent to installing 65,000 in-store pick-up points or lockers across the city.

Fewer than one-in-five parcels (17%) are delivered this way at present. Introducing more of these pick-up points, the report says, would allow companies to deliver large numbers of parcels at once to fewer locations, reducing vehicle traffic on the roads and having a knock-on effect on air pollution and congestion.

It would also mean that Londoners receive their parcels the first time: an estimated 60% of untimed home deliveries end in failure. If progress on setting up universal pick-up points is too slow, the report also recommends that the Mayor of London is given new powers to incentivise Londoners to use pick-up/drop-off locations.

This could include an online sales tax for at-home deliveries which would also encourage delivery companies to set up more pick-up/drop-off locations across the city.

Nicolas Bosetti, head of data and insight at Centre for London, said: “Londoners may like the convenience of doorstep deliveries, but the way we currently move most of our goods comes at a high cost for our health, climate and for the businesses and workers who need to use our roads to get around.

“Many delivery companies already have plans to make their journeys more sustainable, but we need to encourage them to deliver to and from fewer places and support more of them to switch to cleaner vehicles. This means creating space for pick-up points, consolidation centres and EV charging points.

“They won’t be able to do this alone. The Mayor of London and London’s boroughs need to take action to make freight journeys as green and clean as possible, alongside serious investment from the Government too.”

Earlier this year, the Mayor of London, Sadiq Khan, highlighted the issue of increasing home deliveries at a meeting of the London Assembly following the publication of a report into the potential of electric cargo bikes.

He said: “Transport for London (TfL) is working with the freight industry to reduce the adverse impacts of freight traffic.

The Mayor of London told Assembly members that a cargo bike delivery scheme in Hammersmith signed up 125 businesses and made more than 3,600 deliveries, which is estimated to have saved around 788kg of CO2 emissions.

Since 2018, TfL has used the Healthy Streets Fund for Business to help business groups reduce freight and van traffic. The fund has also aimed to improve air quality by setting up local consolidation hubs and using electric cargo bike schemes.

StreathamIN – one of the BIDs that received funding – collaborated with Balfe’s Bikes to run a shared e-cargo bike service for local businesses.

Additionally, through the Mayor’s Civic Innovation Fund, TfL has set up the London Freight Lab, which partners with a range of businesses to trial sustainable and safe freight solutions that will reduce congestion.

Meanwhile, its Freight and Servicing Action Plan champions the strategic role of London’s railways and water networks, given their potential for making the movement of goods more efficient and less carbon-intensive.

The Thames and its wharves already move large volumes of construction materials and every 1,000-tonne barge on the river takes the equivalent of 100 lorries off the road.

Additionally, one freight train removes up to 76 lorries from the road, and in London there are already 32 rail freight terminals in use.

Together, rail and river freight in London represent around 10% of goods delivery miles – but capital investment, says the report, could unlock greater use of wharves, piers and railways for deliveries.

There are also new light freight services such as parcel deliveries coming into central London piers and then using cargo bikes for last-mile delivery.

With investment to adapt passenger piers for freight use, it says that there is potential to scale up significantly and reduce van journeys on the roads.

DHL has started a trial of the EAV eCargo bike for its small-item home delivery service in Edinburgh.

Worth the weight: Making London’s deliveries greener and smarter

This report from the Centre for London looks at how to create a greener and more efficient freight and logistics ecosystem in London.