Cambridge and Peterborough to trial e-scooters and e-bikes 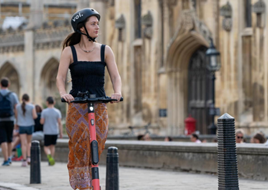 The Cambridgeshire and Peterborough Combined Authority has partnered with Voi to trial e-scooters and e-bikes in the region.

The E-bikes are likely to be placed at rail stations throughout the region as well as Park and Ride sites and potentially at stops along the guided bus way.

It’s envisaged that they will be used by commuters for significant parts of their journey to work and by others including, students and visitors travelling into cities, towns and other areas of interest and leisure.

Work is currently ongoing to look at the potential level of demand and uptake and where they will have most impact.

It is thought that 60% of current car journeys are only one to two miles in length and e-scooters and other modes of active travel could help significantly reduce unnecessary reliance on cars for these short journeys.

Mayor James Palmer said: “Electric bikes and scooters have the potential to revolutionise travel and I am delighted that Cambridgeshire and Peterborough will be the first region in the country to make both available to the public so they can enjoy quicker, healthier journeys.

“This year has seen a 27% drop in carbon emissions and a 200% increase in cycling, with people enjoying soaring air quality and fitter lifestyles, the benefits to moving away from cars and buses are clear and our investment shows we are committed rolling out a fully integrated active travel network for our region.”

E-scooters will be trialled initially in Cambridge on a small scale and their use tested and monitored to assess how well they are working.

Within the first three months of operation, Voi will assess and present recommendations to the combined authority on any additional infrastructure requirements for e-scooters and e-bikes, based on user feedback and user journey data, including feedback from disability group associations such as RNIB and Disabilities Move UK.

So-called micromobility could be set to transform the way commuters and business travellers get around towns and cities.

Tees Valley Combined Authority was named as the first local authority to host an e-scooter rental trial, with Milton Keynes also being given the go-ahead as a test bed for electric two-wheelers.

As part of the trial in Cambridge, Voi will offer rides at £1 to unlock plus 20p per minute and integrate fully with east coast rail operator LNER and Lomob, as the network provider’s preferred partner, the Cambridgeshire Cycling Campaign and support the Combined Authority’s plans for the Cambridge Autonomous Metro (CAM).

Voi subscriptions for £10 a day/£40 a month will also be offered alongside subsidised Voi-4-All Passes for low income groups at £10 per month.

Fredrik Hjelm, co-founder and CEO of Voi Technology, said: “We are delighted to announce that Cambridge, the world’s most renowned city for innovation and technology, will be the first city in the UK where people can use a Voi e-scooter and enjoy the benefits of this liberating new form of transport.

“People are keen to get out of their cars and want greener transport choices. Cities that are serious about cutting pollution and congestion see that this is a huge opportunity to introduce a mode of transport that can radically improve how we get around urban areas.”

The partnership between Voi and the Combined Authority aims to reduce CO2 emissions by 400 tonnes across the region by August 2021.

The Department for Transport (DfT) is introducing new regulations to allow rental e-scooter trials to start from July 4 for the next year across towns and cities in the UK.

Milton Keynes Council and Lime, the micromobility company, will launch a full-scale UK e-scooter trial at the beginning of August.