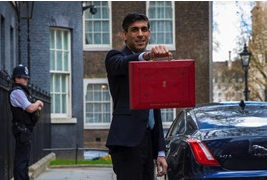 The Autumn Budget revealed that Greater Manchester will get £1bn, the West Midlands will get £1bn and West Yorkshire will see £830 million of investment as part of City Region Sustainable Transport Settlements over the next five years.

Scotland, Wales and Northern Ireland will also receive extra funding through the Barnett formula - a mechanism the UK government uses to allocate additional money to the devolved nations when it spends more in England.

The Budget also confirmed £24bn between 2020-2025 for investment in strategic roads and delivering upgrades such as the A66 Trans-Pennine.

Bus services will see £3bn of investment over the current Parliament, including £1.2bn in new funding for a London-style bus transformation deal to improve infrastructure, fares and services.

Sunak earmarked £35bn of rail investment until 2024-25 to help fund projects like High Speed Two, as well as "rail enhancements and renewals to boost connectivity across the country – focusing on the Midlands and the North".

The full Autumn Budget 2021 document is availble to read online.

An EV infrastructure strategy document is expected to be published later this year to add more detail on the Government’s plans.

A further £350m of the Government's up to £1 billion Automotive Transformation Fund (ATF) will be made available to support the electrification of UK vehicles and their supply chains.

The Government also wants to introduce a new zero emission vehicle mandate that will set targets for a percentage of manufacturers’ new car and van sales to be zero emission each year from 2024.

Subrahmaniam Krishnan-Harihara, head of research at Greater Manchester Chamber of Commerce, said the Budget document leaks ahead of the speech itself had given an indication of what was expected, including the investment in transportation in Mayoral combined authorities.

Krishnan-Harihara said: "Although significant, encouraging local authorities to bid - often against one another - for funds is emblematic of the piecemeal approach that has been adopted for the levelling up agenda and is not going to yield any long-term benefits.

"Levelling up needs more than new buses and bid based grants for projects. It needs vision. It needs a long-term plan. Nearly two years after levelling up became the currency of the Conservative manifesto for the 2019 general election, we will be excused for not understanding what it is and how it will be delivered."

Jon Slowe, director at research and consultancy company Delta-EE, said the financial support for electric vehicles was hidden in the detail of the Budget documents.

Slowe said: "The UK is in an international race to attract EV manufacturing with over 25 gigafactories due to be active across Europe by 2025.

"The UK can’t let up in its commitments to become a global EV leader.

"As such, we are pleased to see £800m pledged to support Electric Vehicle manufacturing .

"Alongside EV policy seen in the Net Zero Strategy and 2030 petrol and diesel car ban – the UK is firing on all cylinders with EV’s.

"However, more investment will be required to ensure the chargepoint rollout continues at its current pace as vehicle sales are currently outstripping infrastructure installations and we predict the EV to public chargepoint ratio to increase by almost 40% by 2030.”

The Government wants to introduce a new zero emission vehicle mandate that will set targets for a percentage of vehicle sales to be zero emission each year from 2024.