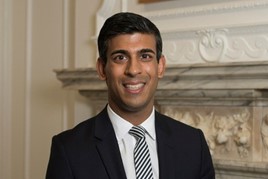 A new UK infrastructure bank, based in Leeds, will launch this spring with initial capitalisation of £12 billion, Chancellor Rishi Sunak announced in the Budget.

The bank, which was first announced in November, will “invest across the UK in public and private funding to finance the green industrial revolution”, Sunak said, and is expected to support at least £40bn of total investment in infrastructure.

Further ‘green’ financial measures include: a new retail savings product, which will give UK savers the chance to support green projects; the formation of a new group to position the City as “the global leader for voluntary high quality carbon offset markets”; and an updated monetary policy remit for the Bank of England,  which will “reflect the importance of environmental sustainability and the transition to net zero”, Sunak said.

To help progress the Government’s Ten Point Plan, Sunak announced new port infrastructure will be built to support the next generation of offshore wind projects in Teesside and Humberside.

Sunak also announced the creation of eight ‘freeports’ in England. These “special economic zones” will make it  “easier and cheaper to do business”, he said, and will be based at East Midlands Airport, Felixstowe & Harwich, Humber, Liverpool City Region, Plymouth, Solent, Thames and Teesside.

Further transport, technology and energy investments included in the Budget:

The Chancellor also used the Budget as an opportunity to launch the first round of funding for the £4.8bn UK-wide Levelling Up Fund.

However, his “immediate priority” was continuing to support those “hardest hit” by the Covid-19 pandemic, with extensions to the furlough scheme, self-employed support, business grants, loans and VAT cuts.

Combined with the support provided in last year’s Budget, these bring the total fiscal support to more than £407bn.

The Office for Budget Responsibility (OBR) is now forecasting  “a swifter and more sustained recovery” than it expected in November, with the UK economy predicted to return to its pre-Covid level by the middle of next year, six months earlier than previously thought.

However, “repairing the long-term damage will take time”, Sunak said.

Unemployment is expected to peak at 6.5% (below the original 11.9% forecast).

To help create new jobs, the Chancellor has made £126m available to fund 40,000 more traineeships and is doubling the cash incentive to firms who take on an apprentice to a £3,000 payment per hire

Apprentices will be able to work with a number of employers in one sector thanks to a £7m “flexi-job” apprenticeship programme in England.

“To keep the cost of living low”, fuel duty will be frozen for the 11th consecutive year – a move which has had a mixed reaction from the transport sector.

The Chancellor acknowledged that “while many businesses are struggling, others have been able to build up significant cash reserves”.

In order to “unlock that investment” he announced a new ‘super deduction’, beginning this April, which will cut a company’s tax bill by 25p for every pound they invest in new equipment.

This means they can reduce their taxable profits by 130% of the cost and is worth £25bn to companies over the two-year period the super-deduction will be in full effect.

This applies to plant and machinery and, according to the BVRLA, electric vehicle (EV) charging infrastructure.

“The super deduction is more of a ‘super missed opportunity’,” said Matthew Walters, head of consultancy and customer data services at LeasePlan UK.

“I would urge the Chancellor to go further and extend this to the costs of grid and infrastructure upgrades where there is currently no relief.”

Chancellor Rishi Sunak has set out the next phase of the Government’s infrastructure plans with £100 billion of capital expenditure.