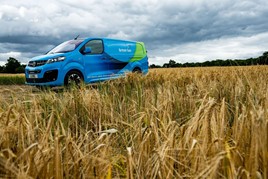 British Gas, which is owned by Smart Transport member Centrica, has committed to electrifying its fleet of about 11,500 by 2025, after signing a deal for a further 2,000 Vivaro-e electric vans from Vauxhall.

The target, five years earlier than planned and ahead of the Government's ban on the sale of new petrol and diesel cars and vans, is part of Centrica's commitment to become a net-zero organisation.

It means that around 10,000 vans and 1,500 company cars will switch to electric, with the business looking to place further orders with Vauxhall for electric vehicles (EVs) as soon as they become available.

Transport Secretary Grant Shapps said: “It’s encouraging to see that one of Britain’s best-known brands is leading the way with the largest commercial EV fleet in the UK.

“This is a huge step as we build back greener, lower our carbon footprint and deliver better air quality up and down the country – with more zero-emission models of cars and vans on the market than ever before, there has never been a better time for drivers and businesses to make the switch.”

Facilities management company Mitie has also pledged to have at least 2,021 pure EVs in its fleet by the end of 2021.

The business launched its Plan Zero strategy a year ago, outlining its commitment to reach net zero operational carbon emissions by 2025.

A series of new pledges has been confirmed for 2021, including a promise to convert more than a quarter of its fleet to electric.

The company also launched the Plan Zero Fleet Transition Service, to help other businesses transition their fleet to zero emissions.

Centrica and Mitie are both part of the Climate Group’s EV100, a global initiative bringing together companies committed to switching their fleets to electric and installing charging infrastructure for employees and customers by 2030.

The number of EVs operated by the large multinationals in the EV100 initiative has risen to 169,000 – more than double the figure 12 months ago.

The EV100 companies have also committed to having 4.8 million EVs on the road by 2030 - an increase of 80% - according to the organisation’s EV100 Progress and Insights report.

“We are leading from the front by not only lowering emissions for our customers and our communities, but by lowering our own emissions, and by increasing the speed at which we do this.

“Fully electrifying our fleet will make a big difference.”

While engineers can volunteer to have the new vans during the roll out, the company said it is prioritising high pollution areas to help lower emissions.

British Gas engineers will install all chargers at engineer homes and is accelerating EV adoption in the UK for homes and businesses with charger installs and innovative EV tariffs.

Mitie, the facilities management company, has launched a new service that aims to help other businesses transition their fleet of vehicles to zero emissions.

Mitie has reached its goal of converting 20% of its car and van fleet to electric three months ahead of schedule.

Battery and plug-in hybrid electric cars together accounted for more than one in 10 new car sales last year – up from around one in 30 in 2019.