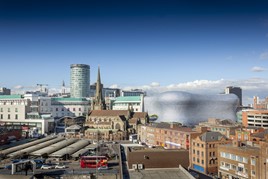 Birmingham City Council have announced plans for the city to become a low-traffic neighbourhood, as reported in The Guardian.

As part of the plans, access to roads in the city, including the central area, will be restricted and split into seven zones, where motorists will be diverted via the A4540 ring road.

The plains aim to encourage active travel and for people to use cleaner modes of transport.

The city also plans to pedestrianise additional parts of the city centre and reduce the availability of car parking through the removal of spaces, increased pricing and clamping down on footway parking.

Waseem Zaffar, transport lead at Birmingham City Council, told The Guardian the city suffers from an excess of single occupancy car journeys and 25% of the city’s car journeys are one mile or shorter.

The transport plan states, “the allocation of road space will change away from prioritising private cars to support the delivery of public transport and active travel networks fit for a global city”.

Earlier this year, Birmingham hosted the Project Endeavour autonomous driving trial to understand how it could reduce private vehicle use.

Councillors are expected to vote the plan through next week, on October 12.

Transport minister Rachel Maclean has been shown how more than three million pieces of data a day from the West Midland’s road network is helping reduce congestion.