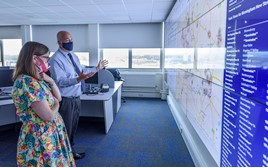 Transport minister Rachel Maclean has been shown how more than three million pieces of data a day gathered from the West Midland’s road network is helping to reduce traffic congestion.

Transport for West Midlands (TfWM) said it is using data that is harnessed from Static Automated Traffic Counters (SATCs) backed up by live feeds from more than 2,000 CCTV cameras covering the transport network to build a detailed picture of traffic and transport movements around the region.

TfWM, which is part of the West Midlands Combined Authority (WMCA), said it is working with partner councils and transport operators to help relieve pressure on the region’s roads – where 50% of the road traffic in the region is carried on 7% of the road network leading to congestion.

Transport minister Rachel Maclean said: “The UK is paving the way when it comes to the future of transport and the development of cutting edge technology and I’m delighted to see this being embedded in the West Midlands area through the Adept Live Labs project.

“Reducing traffic will cut transport emissions and improve air quality, making our communities healthier, better places to live. That’s why supporting innovation is a priority for this Government, as we look to solve the complex challenge of decarbonising transport and achieving net zero by 2050.”

Data is compiled by the Regional Transport Coordination Centre (RTCC), run by TfWM in collaboration with local authorities and transport operators to help direct and manage the transport network around major incidents and large-scale events.

The data is used to offer instant traffic advice and warnings to the travelling public through channels such as West Midlands Roads social media channels. 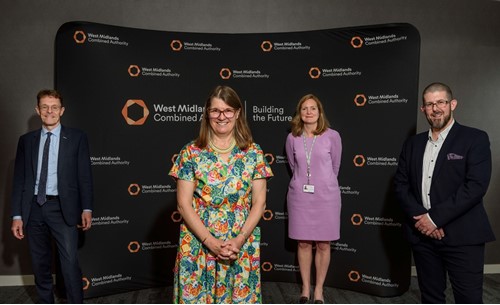 Maclean toured the £22 million RTCC centre in Birmingham, where the data is received, along with live information from public transport operators, and analysed.

Mayor of the West Midlands Andy Street said: “We took this opportunity to show the minister the ground-breaking work being done with big data to deal with traffic congestion on our roads.

"It is a major issue for many thousands of people a day as they travel about our region which is why we are investing more than £1 billion in improving our bus, train, tram and cycling infrastructure around the region as well as relieving some of our notorious congestion hotspots such as Birchley Island in Oldbury.

“Alongside this we have introduced the RTCC which uses the vast amounts of data gathered to produce better travel information, and even spot problems before they develop, so people spend less time sat in their cars – saving them time and benefitting our environment in the process.”

Work is also being carried out, under TfWM’s Future Transport Zone umbrella, to study and research individual travel patterns and behaviour to find ways of better targeting messages to encourage people to change their travel choices – such as choose a better time of day or switch to public transport.

Maclean also spent time with the Future Transport Zone and West Midlands 5G to find out more about their work on projects including the autonomous vehicle testbed.

"Information gathered from the traffic counters is helping us to better manage our network and design new ways of getting about to reduce gridlock and encourage more walking, cycling and greater use of public transport."

Birmingham City Council has launched a vehicle scrappage and travel credit scheme ahead of the opening of its clean air zone (CAZ) on June 1.

Key speakers from the public and private sector will explore how to aid the shift away from private vehicles at next month’s Virtual Smart Transport Conference.