Amazon announces plans for micromobility hubs across the UK 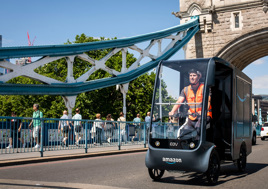 Amazon has opened its first UK micromobility hub in Central London and plans to open more across the UK in the coming months.

The company says its e-cargo bikes and walkers from the new hub, along with Amazon’s electric fleet already on London’s roads, will make more than five million deliveries a year across more than 10% of London’s Ultra Low Emission Zone postcode districts.

Amazon has also revealed plans to roll out large scale solar panel installations at facilities based in Manchester, Coalville, Haydock, Bristol and Milton Keynes before the end of this year, to help power those facilities with renewable energy. It will double the number of on-site solar energy projects in the UK by 2024.

Working with the London Borough of Hackney, Amazon created this new hub with plans to make more than one million customer deliveries every year, adding to the millions of deliveries already being completed by its electric vans.

The new fleet of e-cargo bikes and walkers will directly replace thousands of traditional van trips on London’s roads and reduce traffic congestion.

UK country manager John Boumphrey said: “Amazon is driving towards a global net-zero carbon future. One way we’re doing that is through the transformation of our transportation networks. Our new e-cargo bikes, walkers and growing electric vehicle delivery fleet will help us make more zero emission customer deliveries than ever before across London and the UK in the coming months.”

Transport minister Trudy Harrison said: "Industry and Government are both working hard to achieve our net zero goals and support the growth of sustainable transport that will help create economic opportunities and support thousands of jobs across the UK. Amazon’s plans will not only boost green job opportunities, but ensure that customers will continue to receive their packages while working to protect our planet from climate change.”

And Cllr Mete Coban, Hackney Council cabinet member for environment and transport, said: “Tackling transport emissions is key if we’re to reach net zero. We’re really pleased to have worked with Amazon to support them to take traditional vans off the streets and replace them with e-cargo bikes. This will help to reduce emissions and improve air quality for people in Hackney and beyond.”