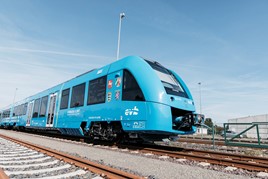 After 530 days and more than 18,000 kilometres two Alstom Coradia iLint ­hydrogen trains are almost ready to go into commercial operation in Germany.

Alstom will produce the fuel cell trains and will also be responsible for the maintenance of the vehicles at its site in Salgitter.

A hydrogen filling station will also be constructed by industrial gas company Linde which will support the series of trains near Bremervoerde station.

Lower Saxony’s Minister of Economics and Transport, Dr Bernd Althusmann said “Alstom has made hydrogen history here. The project is of a great importance to industrial policy that goes far beyond Germany. Here, we are witnessing the first competitive product of hydrogen mobility at industrial level.”

The commercial vehicle industry will have to embrace hydrogen as a fuel in order for the EU to be carbon neutral by 2050, according to a new report by Mitsubishi Heavy Industries (MHI).