Air quality trial will cut some motorway speeds to 60mph 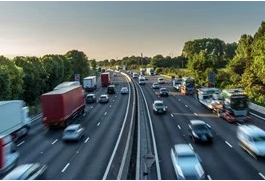 Highways England is to trial cutting motorway speed limits in four areas to 60mph to monitor the impact on air quality.

The areas chosen for the trial have seen higher than recommended levels of nitrogen dioxide.

Each locations is up to 4.5 miles long and the new speed limits will be operational 24 hours a day.

The reduced speed limits will be assessed after 12 months to see if they are having an impact, or if the air quality level is compliant.

Ivan Le Fevre, head of environment at Highways England told the BBC: "Ultimately the air quality challenge will be solved 'at the tailpipe' by vehicle manufacturers and changes in vehicle use.

"Until this happens we will continue our extensive programme of pioneering research and solutions."

Recent Department for Transport figures show the proportion of cars sticking to the speed limit is at its highest on 60mph roads.

The data measures speed and compliance at sites where the road conditions are free-flowing, for example roads with no junctions, sharp bends, speed enforcement cameras or other traffic calming measures.

The DfT says the statistics provide insights into speeds at which drivers choose to travel when free to do so, but are not estimates of average speeds across the whole network.

The transport industry divided in its opinion over whether the Covid-19 pandemic will have a lasting positive impact on air quality in the UK.

Defra has opened up a new round of £2 million in funding for local authorities to help with their air quality plans.