Air pollution clears in cities globally due to coronavirus lockdowns 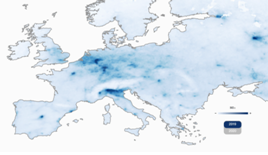 Satellite images have revealed how air pollution has fallen dramatically in cities across the world due to COVID-19 lockdown measures.

In Bergamo, there has been a constant decline in NO2 pollution over the past four weeks. The average concentration during the week of 16-22 March was 47% lower than for the same week in 2019.

Similar trends can be seen in other European cities where lockdown measures have been implemented during the week of 16-22 March.

In Barcelona, average NO2 levels went down by 40% from one week to the next. Compared with the same week in 2019, the reduction was 55%.

However, the European Public Health Alliance (EPHA) said that despite the drops in pollution, “the damage is already done” to those patients that had previously fallen ill with lung and heart conditions as a result of air pollution, making them more susceptible to succumbing to the coronavirus.

Sascha Marschang, EPHA acting secretary general, said: “The damage is already done. Years of breathing in dirty air from traffic fumes and other sources will have weakened the health of all those who are now embroiled in a life or death fight against COVID-19.

“Yet even after the dieselgate scandal, millions of non-compliant vehicles are still blackening the air. Cars and cities need to clean up and the EU’s new zero pollution goal is the perfect reason for taking determined action to dramatically lower air pollution levels when the COVID crisis is over.”

Highways England still has the majority of its £100 million budget left to spend on improving air quality as part of a five year project that ends in 2021.

EU environment ministers have said current air quality rules are fit for purpose, but more needs to be done to ensure standards are met.