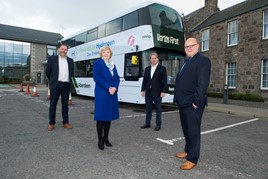 The world’s first fleet of hydrogen-powered double decker buses will arrive in Aberdeen in November as part of the city's net zero strategy.

The 15 hydrogen double deckers will be run by First Aberdeen and will be spotted around the city for several weeks during a period of final testing, along with training for drivers.

The £8.3 million project has been funded by Aberdeen City Council, the Scottish government, and the European Union (FCH JU), with an investment of about £500,000 per vehicle.

Transport for London (TfL) was expected to claim the "world first" with its own fleet of 20 hydrogen double deckers which are due to arrive in 2021, but the introduction of Aberdeen's fleet from the same manufacturer, Bamford Bus Company, has progressed more quickly, so it can now claim the title.

Aberdeen City Council said the hydrogen buses are as efficient as electric equivalents, with refuelling taking less than 10 minutes and offering a greater range.

Water is the only emission from the vehicles which reduces carbon emissions and therefore contributes to Aberdeen's commitment to tackling air pollution.

The UK’s first hydrogen production and bus refuelling station was opened in Aberdeen in 2015, as part of a £19 million green transport demonstration project.

Jenny Laing, Aberdeen City Council co-leader councillor, said: "The roll out of the new double-decker buses will help to cement Aberdeen’s position as an entrepreneurial and technological leader as the new buses come with even more advanced technology which pushes established hydrogen boundaries and greatly assists us in tackling air pollution in the city.”

The buses from Bamford  complement Aberdeen's existing fleet, including a range of hydrogen and electric vans, road sweepers, and cars through a car share scheme.

"They represent the start of what could be a world-leading hydrogen economy here in Scotland which will bring with it multi-million pound investments and tens of thousands of jobs.

“We hope that more councils across the UK follow Aberdeen City Council’s lead.”

JCB heir Jo Bamford is asking the Government to set aside £500 million or 10% of the National Bus Strategy fund to build a 3,000-strong hydrogen bus fleet.

Birmingham City Council is to add 20 hydrogen double decker buses to its fleet next spring as part of its Clean Air Hydrogen Bus Pilot.