£78m investment to electrify rail infrastructure in the north 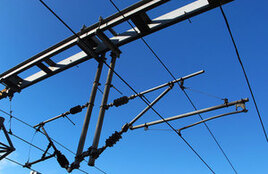 The Government has approved a £78 million investment to electrify rail infrastructure in the north.

The upgrade to the railway line between Wigan North Western station and Lostock Junction near Bolton aims to provide passengers with a greener and ‘more reliable’ railway, through longer trains with additional capacity, said the Department for Transport (DfT).

Platforms will also be extended at Hindley, Westhoughton and Ince stations to reduce overcrowding at peak times and cater for six-carriage trains in the future.

Through electrifying almost 13 miles of infrastructure and lengthening platforms, the investment will ensure that CO2 emitting diesel trains are replaced by electric rolling stock, the DfT said.

Rail minister Chris Heaton-Harris said: “This significant investment will provide a service around Greater Manchester that is better for both passengers and the environment, ensuring our railway plays its part in meeting our ambitious net zero ambitions.”

The electrification is part of the Government’s transport decarbonisation plan.

Phil James, North West route director at Network Rail, said: “To help the region recover from the pandemic, we’re turning over a new leaf thanks to the £78 million investment to electrify the railway between Wigan and Lostock junction.

Nick Donovan, managing director at Northern, said: “In the past 18 months we have made significant improvements to the Northern network with a fleet of 101 new trains, refurbishment of our older trains and enhancements at stations.

“Today’s announcement provides further evidence of the rail industry’s commitment to improve and modernise our services and infrastructure to benefit passengers and the environment.”

Announcement welcomed by Transport for the North (TfN)

The move has been welcomed by Transport for the North (TfN) and described as a ‘step in the right direction’ as the organisation continues to push for investment in sustainable rail schemes across the region.

Martin Tugwell, chief executive at Transport for the North, said: “It’s great news that a commitment has now been made to electrify this key section of the rail network.

“It may be just one piece in a bigger jigsaw, but it will support sustainable rail in this area of the North West for many years to come.”

The scheme builds on the recent electrification of the line from Manchester Victoria to Preston through Bolton and is part of a wider plan for ‘infill’ projects where additional electrification can be built to connect already electrified routes, said TfN.

Tugwell added: “We have already made clear that the need to decarbonise our surface transport network is vital in helping to tackle the climate emergency.

“This is a step towards that, but there remains a huge amount of work to be done – including commitment to projects such as Northern Powerhouse Rail and HS2.”

New Transport for the North (TfN) chief executive Martin Tugwell has said he wants to address inequalities as part of the sub-national body's strategy.

Transport for the North (TfN) is urging residents to have their say on its draft decarbonisation strategy before the consultation closes at midday on August 31.