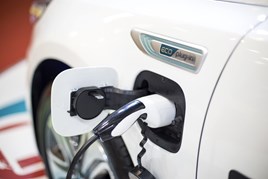 Drivers are deterred from switching to electric vehicles because they do not have access to chargers at home, according to a new report.

Connected Kerb, an electric vehicle (EV) infrastructure company, carried out a survey among 500 people who were EV owners or interested in EV ownership.

This gave insight into what convinced people to buy, and what needs to be done to win over waverers. It concluded that access to charging where cars were already parked – but not public rapid chargers – was a key factor in decisions to buy.

EV drivers want to charge while parked, not at a charging station

Of those surveyed, 64% do the majority of their charging overnight, with a few more doing it at other times at home.

Only 11% do it at public rapid chargers, 5% at ultra-fast chargers, and 5% at work, mostly those who do not have a place to charge on their property.

A further 61% of EV drivers – mostly those who charge at home - said public chargers were only useful when they were away from home.

Chris Pateman-Jones, Connected Kerb chief executive, said: “This shows that EV drivers charge at home if they possibly can.

“They use public chargers only when their preferred option is not available. They do not think like petrol vehicle owners, going to a fixed location to ‘fill it up’ – once people buy an EV their mindset quickly switches to wanting their car to charge whilst it is parked, so that it is charged when they get in.”

For those who charge at home, 67% would not have bought an EV if they did not have home charging.

Of those who could not charge where they parked, 91% said they would if they could.

Of those who do not own EVs, 40% said they did not have somewhere to park it overnight where they could charge it, and this was a barrier to purchasing. 30% specifically said they were disincentivised because charging would be too much hassle.

On the other hand, 89% would be encouraged to make their next car purchase an EV if they had access to a private space – on-street or at work – where they could charge while parked.

The future of EV infrastructure

Pateman-Jones said that while this extra funding is well-intentioned, he believes the Government is backing the wrong horse.

He said: “If just over two thirds of current EV drivers would not have bought an EV if they did not have access to overnight charging, that is a massive red flag.

Pateman-Jones said that there is a risk a two-tier system will be created, where wealthy people with driveways have EVs, while poorer areas are trapped with polluting petrol and diesel vehicles.

The answer has to be an alternative for those that want to charge at home, but can’t.

He concluded: “Charging infrastructure should focus on large numbers of slow chargers where people already park their cars – on street or in work car parks - with ultra-rapids at natural breaks on long journeys such as motorway service stations.

“The inconvenient and expensive public chargers that people have to drive to, and wait around for, will become a thing of the past.”

Centrica and Volkswagen Group partner up for charging solutions

Centrica has signed a deal with Volkswagen to install home charging stations through its British Gas brand for all Volkswagen Group brand customers in the UK.