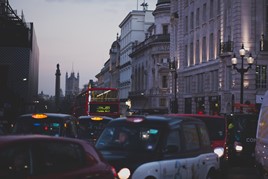 An all-day rush hour could be created by driverless cars clogging roads across European cities, a new study suggests.

The research, from Transport and Environment (T&E), claims that the imminent commercial viability of driverless cars threatens to change the dynamics of road transport.

It also finds that autonomous vehicles could increase greenhouse gases by 40% if they are not regulated.

The report, Less is more: how to go from new to sustainable mobility, proposes options for urban planning that will result in a 60% reduction in vehicle activity and a 32% reduction in CO2 emissions.

It says that the prospect of cars operated by computers and sensors rather than a human driver has implications for safety, parking, emissions, and congestion, as well as social factors such as human health and interaction.

T&E’s new mobility expert, Yoann Le Petit, said: “Automation, electrification and sharing are three revolutions that can transform the way we move around.

“But whether this will prove to be a good thing for the environment and the liveability of our cities depends entirely on the choices governments, city authorities and mayors make.”

The study found that vehicles with no driver could become so cheap to run and convenient that they would encourage people – or even cars without people in them – to travel more and for longer.

This is why, it says, congestion is likely to get much worse if driverless cars are unregulated.

Indeed the study says such cars could increase traffic in European cities by 50-150% by 2050, which would be like a rush hour that lasts all day.

T&E says all driverless cars should be electric, and that any that are not electric should be subjected to an increasingly strict regime of limiting fossil fuel vehicles’ access to cities.

Such a regime could cut emissions by 23% between now and 2050 compared to a world with no electric or driverless cars.

The report proposes a number of ways cities can plan for increasing numbers of driverless cars.

Its modelling shows that cities that gradually reduce space for cars through access restrictions and less parking while promoting sharing of the remaining zero emission cars could shrink vehicle activity by 60%, which in turn would reduce emissions from cars by 32% between now and 2050.

This would put European car emissions on track to completely decarbonise transport by 2050, something that would be impossible to achieve with a “Wild West” unregulated increase in driverless cars, it says.

Petit concluded: “If we want sustainable mobility, we need to ban driverless cars with combustion engines and gradually reduce road space for all cars in our cities.”