CityBus 2.0 celebrates one year of service with 80,000 riders 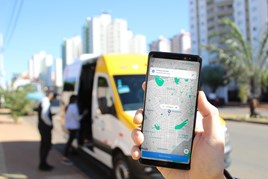 CityBus 2.0, the first on-demand public transport service in Latin America, celebrated one year of service in Goiânia this month, serving more than 80 thousand riders since launching in February 2019.

Powered by Via and operated in partnership with one of Brazil’s largest transit companies, HP Transportes Coletivos, CityBus 2.0 is responsible for eliminating more than 64 tons of CO2 emissions, with the success of the service drawing attention from other Latin American cities like Fortaleza interested in replicating the innovative transportation project.

CityBus 2.0 initially launched a test period with 15 minibuses that covered 11 neighborhoods in the center of the capital. In July, the service expanded to another 13 neighborhoods, covering approximately 40.8 square kilometers, and in November, another five neighborhoods were added to the service zone, covering a 43-square-kilometer stretch of Goiânia.

In its first year, the CityBus 2.0 fleet of 40 vehicles covered a total distance of 1,172,095 kilometers — the equivalent of three trips to the moon. It is estimated that during this period, the service removed 6,500 vehicles from the streets of the capital, Goiás, as 81 percent of CityBus 2.0 customers would have traditionally chosen individual modes of transport (car, motorcycle, ride hailing apps, etc.), according to a survey conducted by the National University of Brasilia (UNB).

Hugo Santana, director of transportation at HP Transportes, said: “Because it’s a shared service, the customer just has to travel a few meters to wait for their pickup, which ensures faster travel on more optimized routes.

“During the day, it is just a few steps, sometimes less than the usual walk between our parked car and final destination. And at night, we still strive to reduce the walk to improve passenger safety.”

Over the course of the year, multiple improvements were made to CityBus 2.0, often as a direct result of rider feedback. The vehicles, already outfitted with comfortable seats and air conditioning,  also received plugs and USB chargers for cell phones, in addition to security cameras for monitoring trips, offering security for both drivers and customers. As for trip planning, passengers are now able to choose between two estimated arrival times. Plus, the service was also extended to Sundays, as requested by customers.

CityBus 2.0 already has 80,000 registered mobile customers on iOS and Android, with the app achieving a 4.8 star review. The best rated aspects include driver conduct, which remains in first place, comfort and cleanliness of the minibuses, and stops/routing. Overall, 98 percent of customers recommend the service.

An on-demand model in Brazil

The success of CityBus 2.0 in Goiânia also serves as inspiration for other cities throughout Brazil. In December, Fortaleza launched TopBus+, an on-demand public transport service similar to CityBus 2.0, and also powered by Via. Operated by the Union of Passenger Transport Companies of the State of Ceará (Sindiônibus), TopBus+ makes the capital of Ceará the second Brazilian city to offer such a service.

Sindiônibus will also launch CityBus DF in the Federal District of Brazil in April, which will initially circulate in the region of Samambaia, Recanto das Emas, and Riacho Fundo II. Urbi Urban Mobility, a company that is part of the HP Transportes group, will carry out this service.

Indiara Ferreira, executive director of HP Transportes, said: “We want to implement the CityBus experience and a new culture of mobility in the Federal District. When our customer leaves his car at home and travels with us, he can take the time to work, read, talk, and even decrease traffic in the city.

“As with the other expansions, all improvements were made based on requests and suggestions from our customers. We are studying the sectors with the greatest requests to enable the expansion of the operation."