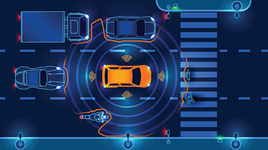 BSI, the UK’s national standards body, has released a new set of standards that set out the minimum requirements for managing safety during development testing and when trialling connected automated vehicles (CAVs).

The PAS 1881 Assuring safety of automated vehicle trials and testing is the first fast-tracked standardisation document, known as a Publicly Available Specification (PAS), to be published as part of BSI’s two-year CAV Standards Programme.

The programme, has been delivered in conjunction with the Centre for Connected and Autonomous Vehicles (CCAV), Department for Transport, Innovate UK and Zenzic. It aims to accelerate the safe use of CAVs with guidance and technical standards.

The standards body also said the specification will help provide confidence to insurers, authorities and the public.

PAS 1881 was produced by a steering group made up of key stakeholders from the UK’s CAV industry, including the Transport Research Laboratory (TRL), Transport for London (TfL) and Highways England.

PAS 1881 will supplement UK government’s own Code of Practice for trialling automated vehicles with core requirements for managing safety during trials and testing.

It also complements the updated Safety Case Framework Report 2.0, also available today, created by Zenzic, the organisation dedicated to accelerating the self-driving revolution in the UK and TRL.

BSI said the report offers high-level guidance and supporting processes to ensure a consistent approach to safety is adopted across the UK’s testbed ecosystem, in line with good practice and PAS 1881.

Scott Steedman, director of standards at BSI, said: “Our ambition in the UK is to create the best possible environment for the safe trialling, testing and deployment of innovative future vehicle technology.

“Critically, this depends on having the right standards that will support industry, regulators and build trust with the public.”

Future of Transport Minister Rachel Maclean said: "The UK intends to remain a world leader in transport innovation from the financing and testing of autonomous vehicles through to data, licencing and global standards.

“That’s why we’re investing more than £200m into research, development and testbeds for connected and automated vehicles. I welcome these new standards from the BSI as new technologies are rolled out, making the movement of people, goods and services greener, healthier, safer and more reliable.”

The second PAS from the programme, PAS 1880, will create guidelines for assessing the safety of control systems in automated vehicles from driverless pods to full production vehicles.

It is due to launch in March and will help companies designing automated vehicles for use in trials and on public roads to assess with more confidence the safety-levels of their end-product, systems and components.

Selling the autonomous vehicle solution: can the benefits effect change?

It’s fairly easy to espouse the pluses of AV uptake, especially in terms of the environment and safety. But are we overlooking the fact that some just like to drive? asks Damien Lambert, an associate director in AECOM’s Consulting business.

How does Government take people on the AV journey? How do they win hearts and minds? What about education? Mobility writer and researcher Beate Kubitz asks the questions.