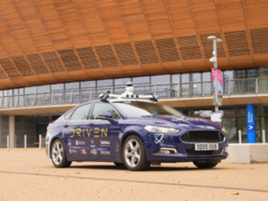 AVs can operate “smoothly, safely and legally in complex real-life situations”, according to project consortium

Driven, the autonomous vehicle consortium, has reached a key milestone on the road to driverless vehicles after completing a week of public road testing around Queen Elizabeth Olympic Park in Stratford.

The consortium has been jointly funded with £13.6 million for the project, alongside matched funding from industry and the UK Research and Innovation’s Industrial Strategy Challenge Fund.

Iwan Parry, TRL market development lead for new mobility, said the trials has provided key information for the insurance sector to help them understand the evidence they require to adapt their business and insurance pricing models when underwriting connected and automated vehicle trials.

This information for the insurance industry will then help underpin a model to get autonomous vehicles insurable for commercial deplayoyment at scale in the future.

Parry said: "We are also using the lessons learned from the Driven trials in the safety framework we are developing as part of the new specifications for regulating the safe conduct of technology testing on public roads in the UK.”

The testing was done with a safety driver present on typical public roads. The prototype vehicles have succeeded driving in complex urban environments without the need for human input, exceeding Driven’s initial plan in terms of complexity vehicles would be put through.

The project is adhering fully to the Department for Transport’s Code of Practice and Transport for London’s (TfL) recently published London-specific guidance for Connected and Autonomous Trials.

George Freeman MP, Minister of State at the Department for Transport, said: “Self-driving technology has the scope to revolutionise the way people travel, with potentially profound benefits for road safety, accessibility and convenience.

“We want to drive the roll-out of self-driving vehicles and continue to support innovators developing this ground-breaking technology.”

Freeman said the success of autonomous vehicle trials underpins the Government’s plans for future mobility as the UK looks to cement its position as a global leader with the technology.