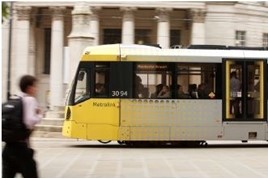 As he puts it: “If I can’t look out of the window and see something that is at least as attractive as what I do now, why would I do it?

“It’s not about cycling, it’s about would you let a competent 12-year-old out on the street?”

That means rather than banning pavement parking, there must be enough room on the pavement for a double buggy to get through, for example.

To bring people along, Brian Deegan’s team went to communities across Manchester with coloured pens and maps.

Deegan said: “We gave them a red pen and said ‘tell me where it’s bad, all the busy roads, rat runs, roads that are difficult to cross and to cycle’, to get people to acknowledge what they’ve done to the area, the barriers we’ve created.”

They found 80% of streets were ‘okay’, then they used green pens for plotting crossings across difficult roads to link neighbourhoods.

The resulting Bee Network, inspired by Manchester’s civic emblem, was a case of “join the dots” between local neighbourhoods.

By strategically placing 2,400 crossings around Greater Manchester they believe they can open up an 1,800-mile network in three years that 92% of the population will benefit from