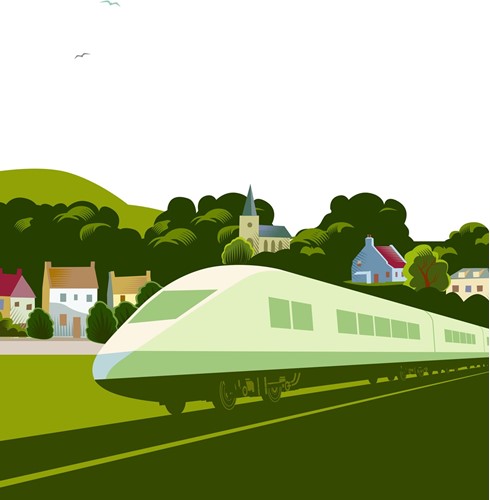 Paul Clifton looks at the prospects for the UK’s rail industry. The long-term aim of overcoming pollution needs to be put back on track in the wake of the Government’s ‘avoid public transport’ mid-pandemic advice

The long-term view of the railway can be summed up in one word: decarbonisation.

Being efficiently and sustainably green is public transport’s trump card. But, in the medium-term, a second word should be added: uncertainty. And, short-term, consider a third: confusion.

The coronavirus pandemic has, temporarily at least, swept the rug from under the industry’s feet. Government advice urging workers to travel by car rather than by public transport took the industry by surprise – to put it politely.

Public transport and social distancing are mutually exclusive concepts. As long as passengers feel unsafe sitting next to strangers, our railways will struggle.

The franchising programme of the past 20 years is over.

With working practices changing fundamentally and more people working from home more often, demand for the traditional season ticket may never be restored.

The fares structure, already cracking and creaking, has become untenable.

Reform is not just essential; it is now inevitable.

Andrew Haines, chief executive of Network Rail, reflects on the impact of the pandemic, saying: “As a country, we will be in a radically different place economically.

"I think the case for change on the railway becomes even more powerful, unlocking the restrictions that franchising placed on us. We have to renew the way we run our railway.

“Otherwise, we miss the fundamental opportunity this crisis gives.

"Alongside a lot of challenges and some really tragic loss of life, there is an opportunity to renew our railway, and we have to seize that.”

Nobody knows with any degree of certainty what the long-term effect of the Covid-19 lockdown might be on the shape of city centre employment.

Or how many people will take advantage of less frequent commuting to further separate where they live from where they work.

Haines admits. “We went into this situation with passenger satisfaction static, but with train service performance deteriorating. The Treasury believed we were inefficient.

“We had a franchising system that was broken. We had a level of service that was way below what it should be. Coming out of this, we have to resolve those issues.”

The requirement to decarbonise public transport remains high up the agenda.

Largely unnoticed due to the pandemic, in spring the Department for Transport (DfT) published a report called Decarbonising Transport: Setting the Challenge.

While the UK has declared a climate emergency and signalled a date for the end of petrol and diesel car sales, the transport industry’s response has been patchy and inconsistent.

However, new diesel trains are still being built, designed for a 30-year life extending long after the sale of new diesel cars has been banned.

This appears to contradict Government aspirations in its decarbonisation strategy which points towards electrification as a primary solution.

Network Rail and Highways England have published a new joint document that they hope will make it easier to develop more parkway stations across the UK.

Network Rail has set out how it will tackle decarbonisation with greener trains as part of its Environment Sustainability Strategy.