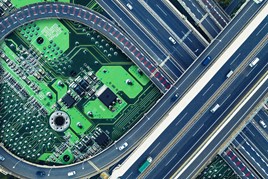 In 1920, the Automobile Association opened the UK’s first roadside filling station at Aldermaston in Berkshire. The 500-gallon storage tank and hand-operated pump marked the debut of a filling station dedicated solely to selling fuel. Up to that point fuel had typically been sold in garages. Over the course of the following 100 years, the UK’s fuel network has grown to almost 8,400 stations, ensuring virtually every driver has ready access to petrol and diesel within a few miles of their home and along the routes of their journeys, with refills taking little more than fiveminutes.

Interestingly, AA patrols attended about 30,000 incidents last year, 1% of its call-outs, because the driver had run out of petrol or diesel. Yet it is the prospect of electric vehicle (EV) ownership that fills motorists with range anxiety. And that’s just one of the challenges facing the EV charging industry as it races to establish a network of charge points that replicate the convenience and comprehensive coverage of filling stations.

But, instead of having a century in which to find this sweet spot, the industry has less than a decade, following the Government’s announcement that the sale of new petrol and diesel cars and vans is to be prohibited from 2030 and plug-in hybrids by 2035.

In a report published in February, the think-tank Policy Exchange calculated that, throughout the 2020s, the UK needs to install public charge points five times faster than the current rate of 7,000 new chargers per year, based on its estimate that the country will need around 400,000 public charge points by 2030, compared with the 35,000 available today.