The smart transport funding crunch. How will the Government make money from motorists? 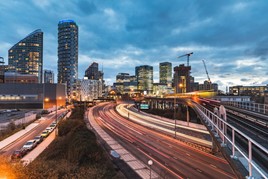 How does the Government raise revenue from motorists in an era of electric cars, usership, autonomous vehicles and MaaS?

The automobile is a cash cow for the Government.

Revenue from the private and business motorist has been so lucrative – to the sum of £48 billion a year – that it has been used to fund a host of non-transport Government initiatives.

Until now, high levels of taxation have been justified as a reasonable charge to cover the external costs of motoring and the knock-on effects on public health,
society and the environment.

The principle of ‘the polluter pays’ has provided political justification for ratcheting up taxes on motorists via the fuel duty escalator and the introduction of a punitive top rate of VED for gas guzzlers of more than £2,000.

Sporadically, Governments have attempted to address the complexities of transport income, yet each time, after heated debate in which the question of ‘road pricing’ is inevitably raised, the Secretary of State for Transport quietly kicks this contentious can down the road.

But the road pricing debate is resurfacing with renewed urgency in the era of zero emissions vehicles and a move towards smart, autonomous and shared mobility.

This raises a fundamental dilemma: if the current transport tax is based on carbon emissions, how does the Government continue to raise revenue and fund transport infrastructure during a wholesale move away from carbon as a means of fuelling cars and vans?

As diesel and petrol cars are replaced by zero-emission EVs, it will become harder to justify taxing motorist so heavily to cover the external costs of pollution.

Three disruptive new technologies are predicted to turn transport taxation on its head over the next decade.

HM Treasury can choose to accelerate or retard their evolution by tweaking the fiscal treatment it applies to road transport, but doing nothing is not an option.

The three technologies are:

By 2030, National Grid anticipates the UK EV fleet will number 10 million vehicles, and, if the Government’s aspiration of electrified vehicles accounting for all new car sales by 2040 is achieved, fuel duty revenues will continue to decline over the next two decades.

At some point, despite making the right environmental choices, EV drivers will need to contribute to the roads they share with internal combustion engine cars.

A widespread uptake of autonomous vehicles is unlikely to happen as rapidly as the shift to EVs.

Progress has been made in trialling driverless AVs for public transport-orientated shared mobility applications, but an explosion in the numbers of private CAVs is likely to be resisted.

MaaS (mobility as a service)

The idea of paying a single monthly subscription for access to all modes of transport has been circulating for a couple of decades and, while the software to facilitate this joined-up approach to mobility now exists, progress towards universal provision across the UK has been patchy.

Yet, if the technology to link up various transport modes seamlessly works well, and users pay for utilisation rather than for ownership, the next generation of ‘shared vehicles’ may have less downtime and there will be fewer of them on the roads to tax.

To date, much of motoring taxation has been justified by ‘the polluter pays’ principle, but, in future, we will need to be more precise about what sort of pollution we are targeting and what kind of behaviours we are trying to incentivise or discourage.