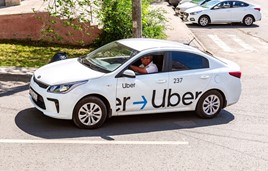 Innisfil, like many new suburban settlements in North America, was built to a low density with cars in mind and, indeed, was so car-based that it had no public transport at all.

The town of 36,500 residents is about an hour’s drive north of Toronto and had long been searching for a solution to its lack of public transport as it sought to reduce car dependency.

Its problem was how could affordable and reliable transportation be brought to a community dispersed across a large geographical area with a small, but rapidly growing, population?

As deputy mayor Lynn Dollin says: “There would be a big price tag attached to it and it would serve only a small portion of the municipality.”

In May 2017, it introduced what is thought to be the first partnership of its kind with ride-sharing taxi firm Uber, to offer residents an affordable and convenient transport option named Innisfil Transit.

Since its launch, the council says it has provided not only thousands of rides, but given an income to hundreds of local drivers who participate.

According to the council, the idea began when its chief administrative officer Jason Reynar noticed a resident walking along a main road in winter with heavy grocery bags.

He offered her a lift and the woman described the problems of getting around Innisfil with neither a car nor public transport. Reynar, as a result, asked council staff to investigate transport options.

Consultants had earlier recommended a traditional bus option with one or two fixed routes. But this would have cost the town C$231,000 (£137,000) in gross capital costs and C$330,000 (£196,000) in operating costs. Even this sum was for a service during only working hours and which would have left many areas unserved.

Staff recommended an on-demand service to cover all of Innisfil and approached Uber.

The council and Uber then collaborated to devise Innisfil Transit, which offers residents flat fare rides to popular destinations.

Innisfil Transit was built ‘on top’ of Uber’s car-pooling service Uberpool, which matches riders going in the same direction so they can share a vehicle and the cost of the ride, making more efficient use of cars.

The benefits of ride-sharing

Uber has said that the council saves C$8m (£4.75m) a year compared with running conventional bus services with the same kind of town-wide reach, but spent only C$165,535 (£98,300) on Innisfil Transit rides in its first eight months.

The service claims an average wait time for a vehicle of eight minutes and 48 seconds and is available round the clock.

Uber had the advantage of being the only bidder which at the time could offer an app-based platform that would facilitate ride-sharing.

According to the Commonwealth Local Government Forum, property taxes are the single most important source of revenue for local governments in Canada, which each sets to cover the cost of services not funded by provincial or federal government financial transfers. The latter are mostly grants for specific purposes.

Innisfil’s experience has no real UK equivalent since, despite substantial service cuts in many places, there are no towns of Innisfil’s size devoid of bus services.

Nor are UK towns, or urban extensions, normally now planned at low density around an assumption of widespread car ownership.

While transport authorities may subsidise bus routes that are judged socially necessary but commercially unviable, a deal such as that between Innisfil and Uber might also raise complications under regulations that govern state aid to private businesses.