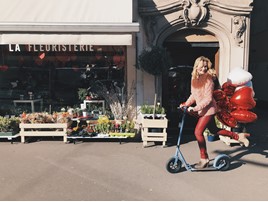 Knot City provides a docked scooter service in Strasbourg, France. It has 30 scooters parked at the exits of eight sites run by city parking operator Parcus. The scooters are used on bike lanes and are, at present, permitted in pedestrian areas. They are slightly larger, sturdier and more robust than scooters used more typically in other schemes. These scooters have bigger wheels intended to cope with a variety of surfaces.

The Knot City collaboration with Parcus works well. Parcus has access to city centre land and the scooters are provided as a service to people parking on the sites – they can use scooters for their last mile journey using their parking ticket. Of the total usage 15% is from Parcus car park users and 85% the general public.

Initially, the scheme had an uneasy relationship with city authorities. Co-founder Polina Mikhaylova says: “City authorities at first were very reticent and not willing to communicate on any kind of scooter sharing installations – partly because of the relatively high usage of bicycles (for France) and existing conflicts between bikes and pedestrians.

“After months of discussions, the situation is changing – although it is inevitable that there will be quotas limiting the number of scooters in coming months.”

The station-based nature of the scheme reduces operational costs. Knot reckons its costs are around 0.5 cents per charge compared with an estimated €8 (£6.90) per dockless scooter. The Strasbourg scheme launched as an open network in September 2018 and in its first six months scooters were ridden four-six times per day and no scooters were broken or vandalised.