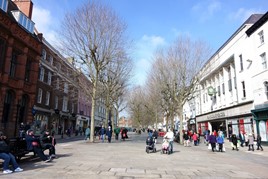 The recent opening of a new footbridge across the River Ouse, connecting the station with York’s historic city centre is emblematic of a concerted scheme to reduce traffic congestion by making York a more pedestrian-friendly city for residents and the millions of tourists who visit every year. The 65-metre long bridge replaces an older structure and is three times as wide as the original Scarborough Bridge – built by Robert Stephenson in 1845.

The £4.4 million scheme is part-funded by the West Yorkshire Combined Authority’s £60million CityConnect programme which aims to encourage cycling and walking across the region.

The new bridge is the latest initiative in a long line of pedestrian-friendly schemes introduced since 1987 that have made the medieval heart of York one of the largest pedestrianised zones in Europe.

More recently, the city’s pedestrianised zone were extended in 2017, with the incorporation of the Fossgate to the city’s growing number of ‘Footstreets’, where vehicular access is restricted or completely prohibited.

According to Visit York, the city welcomes some seven million visitors each year and in 2018, city centre footfall grew by 2 per cent compared to a national decline of the same margin. The ‘general ambience’ of the city is the main reason to visit for most visitors, with shopping and eating being the fastest growing areas of tourism spend.

Two thirds of visitors travel by car – with 13 per cent using the park and ride and exploring the city centre on foot. Just under a third of visitors arrive by train – a figure which increased by 20 per cent between 2010 and 2015.

Research into the perceived value of pedestrianisation in 2011 found that: “York residents are familiar with Shared Space type improvements in the city centre and are therefore, we believe, less resistant to them. York already has an extensive area in the City Centre which has features of Shared Space and Limited Vehicle Access, which is widely perceived to be successful.”

York’s former head of transport Dave Merrett was instrumental in implementing the pedestrianisation project in the face of fierce opposition from local traders.

“City centre businesses honestly believed pedestrianisation would put them out of business, but within a couple of years, they could see that footfall had actually increased and the shops and cafes were prospering as a result.

“But without the park and ride schemes – which were again subject to fierce opposition from residents – I doubt that the pedestrianisation would have been so successful. Strong political will, winning arguments with common sense and a long-term strategic approach are critical in implementing ambitious schemes.

“Today, the extension of the pedestrian zone to Fossgate is supported by most businesses in the area, but there is still an awful lot more we could do. Further pedestrianisation would allow the buses to flow more easily in and out of the city and we need to do more to improve cycling infrastructure, because only the installation of truly segregated super cycle highways achieves the sort of uptake we need.”

The Urban Transport Group’s Jonathan Bray says: “Another factor that is beginning to have a beneficial by-product in reducing traffic is the increased appetite for place-making in city centres. In many cities around the world, vehicles are being pushed out of the city centre to make more room for places that people want to spend time in.

“Obviously transport authorities have a challenge in reconciling place and movement, and city centre businesses still need to have the goods they sell delivered to them, but the triumph of place over movement is a pretty powerful force.”