Tallinn is the largest city to offer free public transport so far. It has a population of 420,000, with a transport network consisting of five tram lines, eight trolley bus lines and 57 bus routes. Allan Alaküla, head of Tallinn’s EU office in Brussels, says public transport was made free in the city because of “social urgency”.

“Ticket costs became a major concern for public transport users in 2010 and 2011, according to annual public services satisfaction surveys,” he says. “In the context where public transport was subsidised already by around 73%, something different had to be undertaken. 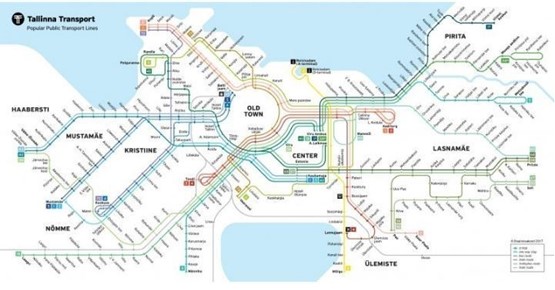 You cannot continue with such a subsidy level when the service still remains unaffordable for many.” It was expected that the change would also stimulate the labour market, widening labour mobility in the city, and increase consumption of local goods and services by encouraging people to go out more during evenings and weekends to local cafes, restaurants and for entertainment. Free travel only applies to residents and to visitors who park at park and ride sites. The scheme covers the whole municipal transport network including bus, tram and trolleybus fleets, a total of about 600 vehicles.

From October 2013, commuter trains inside the city limits were added, but this represents just 2% of trips. Alaküla  adds: “Free public transport is one of several measures to contain private car traffic in  the city centre, combined with a steep increase in parking tariffs, an expansion of paid street parking areas and radical redistribution of street space by creating exclusive public transport lanes at the expense of general traffic lanes and also street-parking places.” Another objective was to increase  the  number of residents registered in Tallinn, which  attracts a contribution of about €1,000 (£860) per person from income tax. On this basis, the city more than covered the loss of fares, with a surplus of €2m (£1.7m).

On the municipal network, there was an increase in passenger demand of 10% show a slight decrease in car traffic in the city centre of 6%, but also an increase of 4% around  the  city  centre  (believed  to  be  due  to a steep increase in parking tariffs in the most central area). Cycling’s share of trips remains at 0-1% and the share of walking fell from 12% to 9% after free transport was introduced. Analysis of transport statistics by Oded Cats found that about a year after the introduction of free fares, public transport use had increased 14%. This figure is lower than may be expected because there was already a good level of service provision, high public transport use and low fares before free fares were introduced, the report says.

The Cats’s study also found that modal shift from car to public transport was accompanied by an undesired shift from walking to public transport, and mixed evidence concerning whether free transport improved mobility and accessibility for low-income and unemployed residents. The policy led to more trips by these user groups, but there is no indication that employment opportunities improved as a result, Cats concludes. The success of the scheme in Tallinn led to a demand for free public transport elsewhere in Estonia, and legislation was introduced to allow it to be introduced on a county by county basis. When the legislation came into force on in July last year, 11 out of 15 counties opted to provide free transport. In those counties, public transport trips increased by an average of 32% in the second half of 2018.