How an improved Eco Levy would have multiple benefits 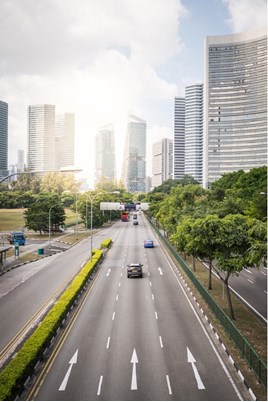 An Eco Levy could generate billions for improving public transport – and might even be a surprise weapon for politicians at the ballot box, says environmental researcher Lisa Hopkinson.

What one smart transport measure could reduce carbon, air pollution, congestion and many other impacts of road traffic while generating revenue for investment in public transport and active travel?

Cities that have introduced road pricing, such as London, Singapore, Stockholm and Milan, show this is a highly successful way of reducing traffic and cutting air and carbon pollution.

In London, traffic in the charging zone fell by one fifth and carbon by 16% four years after the introduction of congestion charging.

When Singapore introduced its national road pricing scheme in 1975, there were dramatic reductions in traffic, which has continued as people have switched to public transport.

Successive UK governments have been reluctant to implement national road pricing, preferring to pass the buck on charging to local transport authorities.

Despite having the powers for nearly 20 years, no local authority outside London has had the nerve to introduce road charging.

Some councils are tentatively introducing chargeable clean air zones (CAZs) to reduce air pollution, but these won’t address carbon from the majority of road mileage outside urban centres.

We need to cut road traffic significantly – and soon.

In a recent briefing for Friends of the Earth (FoE) on the transport policies needed to address the climate emergency, my colleague Lynn Sloman and I contended  that we need an ‘Eco Levy’ road pricing scheme to tackle climate change, toxic air pollution and other negative impacts of traffic.

This charge would be distance-based but with lower rates for electric vehicles and there would be investment in public transport both before and after the charge is introduced.

With satellites and mobile communications, technology is no longer a barrier to national road pricing.

The much bigger hurdle is political; with politicians reluctant to act out of fear, this will be unpopular.

Yet time and again, experience has shown that once a road pricing scheme has been implemented and people see it works, their support for it increases.

In the wake of London’s congestion charge, around two-thirds of residents surveyed felt they had gained from it, or it had made no difference to them, compared with a quarter who were worse off.

In Stockholm, public support rose from 40% before the charge to 70% seven years after it was introduced.

In a referendum in Milan, 79% of voters supported a proposal to extend their charging scheme to all vehicles and cover more of the city, alongside improvements to public transport.

A road pricing scheme is more likely to be politically achievable early in the electoral cycle when politicians do not face an election at a time when support is lowest, just before a scheme is introduced.

If it is shown that the income from an Eco Levy will be used to improve public transport and reduce fares, while cutting carbon and improving air quality, many people will support it.

We believe the best way to win public and media support for an Eco Levy is to combine it with free local public transport. This is already free in more than 100 towns across the world.