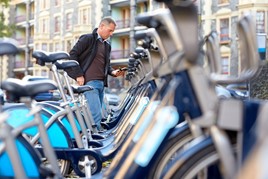 The desire to reduce traffic congestion and cut polluting emissions from vehicles are concepts everyone can get behind. But will the pursuit of these goals mean we are shifting problems form the roads to the pavements? Beate Kubitz reports

Embracing micromobility requires sensitive planning and a dose of common sense by city policymakers. Handle it poorly and the pavements could become cluttered and dangerous; handle it well and commuters will be able to take advantage of flexible, zero-emission vehicles to complete their car-free journeys.

Micromobility, at its very essence, is about travel solutions for covering short distances – usually the first or last mile.

The choice of vehicle that can perform these short hops has expanded from the original (and UK legal) micromobility vehicle, the bicycle and its electric-assisted cousin, the e-bike, to electric scooters and solutions for city centre deliveries such as cargo bikes, e-cargo bikes and trikes.

These solutions may appear attractive to cities trying to discourage cars and vans from entering central zones but changes to the law in the UK are necessary to allow some of the newer innovations to be tested and used. 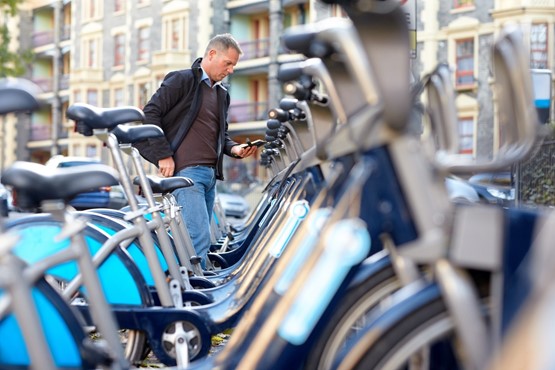 The rise of bike-share in cities is instructive in the potential for micromobility. Bike-share in the UK has more than 650,000 users across 26 schemes, according to shared transport umbrella group CoMoUK. While the majority of bikes and users are in London (16,000 bikes), there are substantial and growing schemes in cities such as Glasgow and Cardiff which have 500-1,000 bikes each. In addition, there are many smaller schemes of just 20-30 bikes in places like Exeter.

These bikes are used for flexible travel and convenience within city centres by commuters and visitors alike. Users are found across the age ranges, are fairly evenly split between men and women, and are drawn from all income groups, according to CoMoUK, which surveys bike-share users each year.

A total of 49% of respondents combined bike-share with other modes as part of a multimodal journey on their most recent trip – for instance taking a train and using bike-share for the last mile.

They mainly value bike-share as an alternative to walking – 42% of respondents had switched from walking for their trip (which perhaps explains why 78% of users say they use bike-share to save time). In addition, 27% switched from bus or train, 7% from their own bike and 7% were making a new journey.

More than three-quarters of users did not, therefore, contribute to city objectives of reducing pollution and congestion.

More worrying still for city authorities was the fact that just 14% of respondents said they had switched from car or taxi to bike-share. However, on a more positive note, 33% did say they were using their car less.

Bike-share, itself, has evolved. Initially, all schemes were of the docked variety which requires robust (and expensive) on-street infrastructure of the kind used for the London Santander scheme.

Over the past two years, dockless schemes (where bikes can be left – almost – anywhere within the operating zone as opposed to being hired and returned to docks) have been introduced and withdrawn from several UK cities leaving just a few areas – principally London, Oxford and Milton Keynes – with an element of dockless operation. Electric bikes have been introduced in London (the dockless Lime bikes), Exeter and Derby.

Dockless bikes were initially welcomed as infrastructure-light options to enable more and faster deployment of bike-share schemes. However, they quickly attracted some of the criticisms levelled at electric scooter fleets as they created street clutter which is both unattractive and dangerous for blind and disabled pedestrians.

Handle micromobility well and commuters will be able to take advantage of flexible, zero-emission vehicles to complete their car-free journeys. To find out how, read the full article, Travel solutions for short distance journeys (PDF), taken from the Smart Transport Journal.