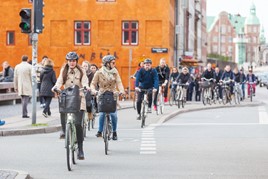 Nine out of 10 people in Denmark own a bike and Danes cycle an average of 1.6km every day, with cycling accounting for a quarter of all personal journeys of less than five kilometres – and women making more journeys than men. The country has more than 12,000km of cycle route with 400km in Copenhagen alone.

Journeys made by bike reduce Denmark’s CO2 emissions by 20,000 tons a year and Copenhagen’s cycle commuters take a million fewer sick days off work than their non-cycling colleagues.

According to a 2018 survey by the Confederation of Danish Industry, if the number of cycle journeys increased by a further 10 per cent, the number of sick days would fall by another 267,000, while traffic congestion would reduce by six per cent.

And while the Danes have a strong cycling culture, the growth in cycling in Copenhagen is due to a sustained investment of Government funds and political will over the last 35 years.

Between 2009 and 2014, Denmark invested €268 Million on 338 cycling infrastructure projects to make cycling more attractive, frequent and safe. This is believed to have resulted in an increase in cycle journeys of 24 per cent on the new, cycle-friendly sections of road.

Urban planners introduced dedicated cycle paths and bridges as part of a nationwide network of ‘cycle superhighways’ – giving cyclists priority over cars – especially in towns and cities. These improvements resulted in 63 per cent of cyclists surveyed saying they felt cycling was safer on the cycle routes.

According to Denmark’s Office for Cycle Superhighways, the Copenhagen City Region’s cycling infrastructure investment has resulted in a modal shift in which 25 per cent of new cyclists previously used their cars.

The Cycling Embassy of Denmark, which is dedicated to helping other cities around the world implement learnings from the Danish cycling model, is clear about the benefits. The Embassy’s 2018 annual report concludes: “While the cost of cycling infrastructure is often much lower than that of other modes of transportation, the benefits of cycling are substantial for both the individual and society as a whole.

“The bicycle plays a crucial role in the smart city, and new, intelligent solutions should allow for and accelerate increased cycling as part of an integrated transport system. Cycling contributes to humanizing and democratizing our cities and securing a good quality of life for future generations. Designing cycling-friendly cities means designing people-friendly cities characterized by vibrant urban life and social interaction.”