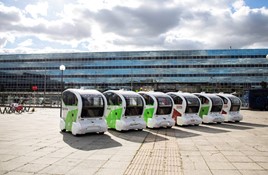 It evaluated seven connected vehicle technologies, some of which could be rolled out almost immediately, while others – as the project’s final report concludes – remain works in progress.

Led by Arup with support from more than a dozen public and private sector partners, the project took place on the public roads (and pavements) of Coventry and Milton Keynes

In the near- to mid-term – thanks in part to new rules approved by the European Commission this year –connected technology is likely to have amore immediate impact on UK driversthan wholly autonomous vehicles.

Provides a warning when a vehicle ahead suddenly brakes – especially useful when driver is unable to see the lights of the vehicle in front due to weather conditions, road layout or other vehicles in between.

Conclusion: has “strong potential” to reduce road accidents, although more refinementis needed; e.g. in defining the timing of the driver alerts and determing whether the braking vehicle should continue to send warning signals once it has come to a stop.

Conclusion: needs more work on the roadside infrastructure, including the signalling and phasing of the connected traffic lights.

Sends a signal directly from an emergency vehicle to nearby connected cars advising of its approach and direction.

Conclusion: effective and could be introduced in the near future.

Warns the driver when it is unsafe to enter an intersection, due to a high probability of collision with other vehicles.

Conclusion: worked within the parameters of the trial (which focused on T-junctions), but real world is more complex. More work and more connected vehicles are necessary before this technology can reach maturity.

Assigns priority when two or more connected vehicles come to an intersection without priority signs or traffic lights.

Conclusion: the most futuristic as it relies on 100% of cars being connected. Unlikely to appear until after automated vehicles are “well integrated”.

Sends information about road conditions, congestion or incidents direct to the in-car display, rather than relying on expensive gantry systems.

Provides real-time information about free parking spaces either in the vicinity or close to the driver’s final destination.

Conclusion: could be introduced in the near future.

By the end of the project, the manufacturers had made major progress in terms of autonomous vehicle (AV) capability, but the trial also highlighted a number of challenges in the path of AV development.

These include: synchronising the processing speeds between different elements of the AV ecosystem so they all operate within the same timeframe, pedestrian avoidance, dealing with potholes and relying solely on GPS to keep vehicles in the correct lane.

The trial’s pavement-based Aurrigo self-driving pods are the type of last mile technology which could solve the challenge of connecting various transport modes for both passengers and parcels for a commercial rate as low as £3 per journey.

The project report says this new class of vehicle blurs the lines between public and private transport.

To underline this, at the end of the trial, a ‘grand finale’ demonstration was staged in which passengers arrived in a connected or autonomous car that parked itself before passengers were transferred to a fleetof 10 Aurrigo pods for the short journey to Milton Keynes Central station.

The first, in 2016, found that the public were open-minded about the technology (35% said they would use one), while the second, in 2018, found a slight hardening of attitudes, with 33% of respondents now saying they would use a self-driving vehicle.

Using a complex model traffic environment, Cambridge teams concluded that self-driving vehicles could have a markedly beneficial effect on traffic flows, mainly as a result of these vehicles having a better driving discipline (and less variability) than conventional human-driven cars.The study found that congestionlevels (as measured by journey delaytimes) could be reduced by as much as25-30% if all the vehicles on our roadswere replaced by fully self-driving ones.However, this study did not takeinto account the additional journeys that would be generated by the more widespread availability of self-driving technology, including empty cars travelling to pick up passengers, and by groups who currently aren’t able to drive – such as children, those with disabilities or due to old age.

For example, 15% of people said they would use AVs for going out socialising and drinking with friends, rather than relying on public transport.

Project director Tim Armitage says: “From the initial brief, we have moved on to lay a significant foundation for the many projects that will now follow – delivering not just a new generationof vehicles, but also a body of work that will help define the future roads,regulations and safeguards needed toaccommodate them.”