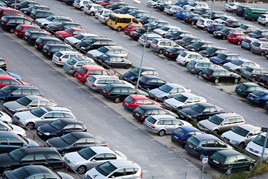 Introduced in 2012, Nottingham’s Workplace Parking Levy (WPL) was the first scheme of its kind in Europe. The scheme levies a charge of £402 per annum on each parking space provided for city businesses for their employees. Emergency services and other essential users are exempt.

The scheme is designed to discourage workplace parking provision and encourage more sustainable forms of commuting into the city centre, but it has also raised millions of pounds which is strictly ring-fenced for spending exclusively on enhanced public transport provision.

Since its introduction, the WPL has raised £53m directly and unlocked three times that amount in terms of additional match-funding investment in public transport.

This has helped pay for an extension to the incredibly popular tramway and one of Europe’s largest fleets of biogas and electric buses. WPL revenue also contributed to a wholesale redesign of the city’s railway station.

While there are some in the business community who continue to question the imposition of addition costs of doing business, WPL is accepted by the majority of businesses and employees subject to the levy as a fair way to shoulder the burden of reducing congestion and – increasingly – improving air quality in the city centre.

WPL Service Manager Nigel Hallam says: “The beauty of this scheme is that we took a licensing rather than enforcement approach, which would have involved much more expensive physical infrastructure such as the cameras associated with schemes like the London Congestion Charge.

“The principal costs are associated with admin and communications – because we invested very heavily in a comprehensive programme of publicity and consultation with the city’s business community.”

“As a consequence, compliance with the WPL is 100 per cent while the cost of operating the scheme is only around 5 per cent of the revenue yield,” says Hallam. “To date no employer has received a sanction due to the focus on compliance as opposed to enforcement.”

Because the charges are relatively low, many employers – some of whom pass on the costs to employees – opt simply to pay the charges. The WPL package of improvements will take 2.5 million cars off the roads, reduce traffic growth by around seven per cent – helping to reduce pollution and carbon emissions.

“We were never going to solve Nottingham’s congestion issues, but independent research has demonstrated that we have certainly slowed the growth of traffic in the city,” says Hallam.

Where the scheme has had a pronounced impact is in funding additional public transport provision to encourage modal shift. The trams the WPL has helped to fund are proving hugely popular with city residents, with a 1 million additional passengers using the trams since the network was extended in 2015.

Nottingham’s head of transport strategy Chris Carter adds: “Initially, the Workplace Parking Levy was very much a means to an end. We really wanted to extend the tramway system and we needed to raise revenue to unlock the match funding to do that.

“But as well as helping fund the tramway, we have used some of the revenue to complete a significant upgrade to the railway station and upgrade the bus fleet to cleaner diesels, biogas and one of the largest fleets of fully electric buses in the UK.

“We’ve also put some funding into helping employers encourage their staff to use sustainable transport and given grants to install facilities such as cycle shelters and showers.

“So the WPL has unlocked the funding to pay for a whole range of initiatives that – as well as reducing the growth in traffic, has reduced CO2 emissions and improved air quality.

“Nottingham was one of five UK cities facing the imposition of a DEFRA Clean Air Zone, but the package of measures the WPL has helped fund will reduce NO2 levels below the levels required by the Government.

“In terms of CO2 emissions, we met our target of reducing CO2 emissions by 26 per cent two years early and Nottingham now wants to build on the progress we have already made to become the UK’s first carbon neutral city by 2028.”