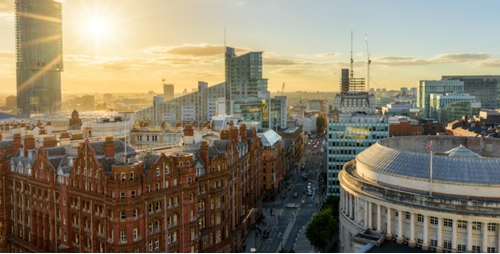 Greater Manchester has set out some ambitious goals for its transport strategy over the coming 20 years that put mobility as a service (MaaS) and active travel at the heart of its thinking.

Transport for Greater Manchester (TfGM) wants half of all journeys across its 10 district boroughs to be made by walking, cycling and public transport by 2040 with no net increase in motor vehicle traffic – this is what it calls ‘The Right Mix’.

The city is aiming to be net zero carbon by 2038 which will also require Greater Manchester to be at the forefront of electric vehicle (EV) technology.

TfGM is also pushing ahead with its clean air zone (CAZ) by spring 2022. This will mean that the most polluting heavy goods vehicles (HGVs), buses, coaches, taxis and private hire vehicles will be charged to enter.

Businesses will be incentivised to make the switch with £150 million of Government funding to support those investing in new technology.

TfGM transport strategy director Simon Warburton and his team spoke at the Virtual Smart Transport Conference in November, where he said he would like to reposition the transport authority as a mobility provider within the next five years.

The event was held in collaboration with TfGM and featured multiple speakers from across the transport authority’s teams.

Warburton says TfGM needs to accommodate Manchester’s growing population, expected to be more than three million by 2040, with a transport system that can handle an additional million journeys per day by sustainable transport and active travel.

He adds: “To achieve that will require a far more sophisticated understanding of travel behaviour.

“So, getting a clear sense of the diversity and the richness of our lives and how we take different decisions will be crucial.”

The TfGM team knows its 2040 strategy won’t be easy to deliver. But in preparing with long-term thinking in mind, it believes it is putting in place the right framework to face up to the challenges of the next 20 years.

Engaging with the private sector

Working with the private sector to deliver on TfGM’s ambitious goals will be essential.

To help facilitate this, TfGM will publish its first transport innovation prospectus this year and has already refreshed its 2040 strategy in January 2021, as well as published a delivery plan that sets out key objectives for the next five years (see following text).

The prospectus will clearly set out the challenges the region wants to collaborate with the private sector on. Warburton is hoping it will help attract serious approaches by the private sector to get involved with TfGM to help deliver its goals.

He says: “At times, my inbox and LinkedIn account are filled with lots of speculative approaches from different companies. That can quickly become unmanageable.

“So we hope the prospectus will help us to frame a conversation with those who are interested in coming to work in Greater Manchester.”

If the prospectus works in the way Warburton is hoping, it will mean TfGM is able to establish individual contractual relationships with private sector specialists. These companies, in turn, will become a growing part of the industrial strategy for Greater Manchester.

TfGM is undertaking a “significant amount of ongoing work” to develop, appraise and prioritise the interventions in its five-year plan, saying there will be “tough choices about where limited funds can make the biggest difference”.

Nicola Kane, TfGM head of strategic planning, insight and innovation, says: “We have a strong reputation for developing pilots and being prepared to fail and try things. We want to test innovations against our long-term ambitions.”

The innovation prospectus is based on five themes:

*     The role of artificial intelligence (AI) and data

Kane acknowledges that the latter – energy – is the one that needs the most development.

She says: “We’re going to need a transition across the transport network to zero emission and we need to know how that will affect our energy systems.

“We want to engage with a range of stakeholders to shape that.”

As Warburton explains, having the drive of an Olympian behind your active travel plans has been an easy way to help energise the team.

Warburton says: “Chris has got great passion for the active travel agenda. He’s also got a real clarity of thought and way of boiling challenges down to a real-world reality.”

Warburton says TfGM has seen a greater proportion of people working in the city and living within a five-mile radius of the centre.

He adds: “So, all of a sudden, active travel becomes a really relevant consideration in the context of the working of the city.

TfGM is working with Innovate UK and Manchester’s CityVerve consortium to track movement patterns through a particular university corridor in central Manchester.

As part of its response to the coronavirus pandemic TfGM has been granted a trial to use AI to understand CCTV images through some of its transport interchanges to get a better sense of pedestrian movements.

CityVerve is made up of 20 organisations, including Manchester City Council, Cisco and BT, to pioneer the use of Internet of Things (IoT) technologies to redefine “smart” in the context of a working city.

Warburton says: “This travel-movement tracking technology should benefit the end user and the city. That’s what a good MaaS platform should be about.”

Car is ‘still too often king’

Warburton is acutely aware that across short distances “the car is still too often king”. These short journeys ought to be ones that can be moved across to sustainable alternatives.

Warburton acknowledges that cities generally have not quite cracked how to move short car trips to active travel just yet.

He thinks more data will hold the key.

Warburton says: “We’re all carrying various forms of data around in our pockets on a daily basis.

“How can we start to work with the sector to better understand the granularity of the data and develop a mobility offer over time?

“That data has a commercial value, but also value in its ability to help us start to develop the right blend of solutions.”

Warburton believes there is an important step to make with both new and traditional transport sectors to work out how to create a safe space for sharing of data.

That means transport authorities like TfGM can start to use data aggregators to create mobility service models that are shaped by analysis.

He adds: “We want to use digital solutions to really help guide people around our city region and the whole concept of MaaS has been very much at the heart of our thinking.

“We’re very keen to step forward with partners to really start to deliver the technology solutions for MaaS.”

TfGM has set ambitious long-term goals to transform mobility across its region, but it also knows it needs some shorter term goals as the first steps towards its larger vision.

The plan is structured around five themes: Our Bus, Our Metrolink, Our Rail, Our Streets and Our Integrated Network, which are part of the Our Network 10-year plan “to create a world-class, modern, integrated and reliable transport system for Greater Manchester”.

Subject to business approval, there is already significant funding allocated to capacity and infrastructure improvements across all five themes from now until 2026, as well as investment for expanding the EV-charging network, behaviour change programmes and implementation of the GM Freight and Logistics Strategy.

In addition, TfGM has set out 10 authority-specific local implementation plans (LIPs) to provide detailed guidance on how each transport goal will be achieved in each local area.

Mayor of Greater Manchester Andy Burnham says: “The Covid-19 pandemic has had a profound impact on the journeys we make and the way that we travel. It is unclear how long it will be before travel returns to previous levels, and the long-term impacts of Covid-19 on the economy, on the environment and on the way that we all live remain to be seen.

“However, now is not a time to pause. If Greater Manchester is to recover, then we must press on and work harder than ever to realise the ambitious plans we have for our city region.”

Burnham says that while the five-year plan is critical, it is by no means the last word on the region’s transport ambitions and he is pushing for greater investment and reform.

He adds: “This five-year plan represents a significant step on the way to ‘building back better’ to a better connected, cleaner and greener Greater Manchester.”