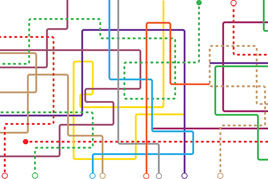 The Government recently awarded £5.7 billion to combined authorities to transform regional transport while at the same time continuing to haggle over public transport subsidies in London. A further £1.1bn was granted to deliver local authority bus service improvements – less than a fifth of the funding requested. So, we ask:

Will the Government’s apparently patchwork approach to transport subsidies actually level down London and only serve to deepen transport inequalities elsewhere in England?

The pandemic has highlighted the vulnerability of public transport systems operating without taxpayer subsidies. Bus, tram and light rail services required millions of pounds in Government handouts to keep them running during repeated lockdowns and the Government was accused of siphoning off two-thirds of the £3bn funding intended for the ‘Bus Back Better’ scheme to keep regional transport running. The Department for Transport (DfT) has since conceded that part of the funding was used to maintain services during the pandemic.

In London – previously regarded as the ‘gold standard’ to which regional transport systems should aspire – mayor Sadiq Khan is locked in a protracted battle with the DfT over Transport for London (TfL) subsidies.