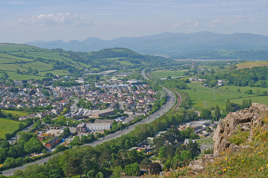 Transport for Scotland embarked on a review of its roads programme in 2019 and the Welsh administration has two road building reviews underway.

Both devolved administrations have publicly pledged targets of 20% reductions in road traffic by 2030, but Whitehall remains committed to its £24 billion roads programme and has remained silent on reducing traffic.

In Wales, strategically critical projects such as new bridges over the rivers Dee and Dyfi have been ring-fenced, but the Welsh Government has accepted that reducing the country’s carbon footprint requires a reduction in the number of journeys made by private car.

The establishment of the country-wide review led to a separate review of the entire North Wales corridor which will focus on exploring evidence-led multi-modal alternatives to a package of improvements to the A55 (pictured) at Llanfairfechan.